Home » Can You Use Drywall Anchors in a Ceiling?

Can You Use Drywall Anchors in a Ceiling?

When you want to hang up something like a mirror or shelf, you might think about using drywall anchors. But can drywall anchors be used in a ceiling?

Yes, you can use drywall anchors in a ceiling. Common types include toggle bolts, expansion, and self-drilling anchors. They are made of plastic or steel and come in varying sizes to hold different amounts of weight.

We will describe them more in detail so you know exactly which one to use in your next project.

What are the Advantages of using drywall anchors?

There are three main advantages of drywall anchors over more traditional ceiling fasteners:

Drywall anchors allow you to install ceiling lights without having a hole in your wall. Just screw it into the ceiling joists above where you want the light, and you’re done.

In addition, drywall anchors enable you to hang many things on the ceiling without making holes in the walls.

Simply put the anchor in place, and screw your fixture or another item to the anchor.

Finally, drywall anchors reduce frustration and injuries during installation. You won’t have to worry about getting stabbed by a screw while trying to hold a ceiling medallion in place while someone else screws it down.

What are the Disadvantages of using drywall anchors?

There are also some disadvantages when using drywall anchors.

Some drywall anchors come with an adhesive strip. This makes installation a lot faster and easier since you can install the ceiling light or other fixture without needing to hold it in place while someone else screws it down. However, most models do not have this feature.

If there’s no way for you to get access to the back of the drywall, you won’t be able to use a drywall anchor. You will have to find another way of hanging your fixture or other ceiling items.

Drywall Anchor is Not as Strong as Screwing into a Stud

Drywall anchors can support medium-duty loads, but you should not try to hang anything too heavy from them. When using drywall anchors for safety and security reasons, you’re better off using toggle bolts or molly screws.

What Type of Drywall Anchor are available?

There are three types of drywall anchors:

Expansion Drywall Anchors use a spring-loaded design to create an anchor point. When you turn your screwdriver clockwise, it expands the anchor against the wall or ceiling and holds it in place.

Toggle bolt anchors have a toggle arm that holds the anchor in place. When you turn your screwdriver, it tightens down on the toggle and holds the ceiling medallion or other fixture in place.

Self-driller drywall anchors offer a different take on the traditional drywall anchor. Instead of using a spring-loaded design, they have their own drill bit that actually drills into the wall or ceiling.

You just need to turn your screwdriver clockwise to drive the anchor in place and install whatever you’re hanging up.

How to Install a Drywall Anchor?

Before installing your drywall a Cher You’ll need to gather some materials beforehand such as:

You may want to use some drywall anchors with adhesive if you’re doing this on freshly painted drywall so it doesn’t get messed up by screw holes.

Next, you are going to have two different ways of expanding your anchor depending on which type you are using: expansion anchors and toggle bolt anchors.

Expansion anchors work by putting pressure on the spring-loaded design of the anchor. It expands against the back of the wall or ceiling when you turn your screwdriver clockwise. You will have to hold your fixture or other items in place while someone else tightens it up.

Toggle bolts are spring-loaded toggle arms that hold your fixture in place when you tighten down on them with a screwdriver or Allen key.

Self-drillers have an expandable drill bit to create their own anchor points in the wall itself. You just need to turn your screwdriver clockwise to drive the self-driller deeper into the drywall, create an anchor point, and install whatever you’re hanging up.

3. Install & Tighten Down Your Fixture

Now that you have created an anchor point, all that’s left is installing your fixture or other items up there and tightening it down so it’s secure. Make sure not to overtighten anything as this can cause damage to your ceiling or walls.

How to Choose a Drywall Anchor?

Before you buy a drywall anchor, you’ll want to know some of the basic differences between them and how that will affect your choice. You’ll need to consider:

The surface your anchor is going into:

Both self-drilling and toggle bolts can be used on drywall, wood, or metal surfaces however expansion anchors are best used in drywall only.

The weight of the object you’ll be hanging up

You’ll need a slightly more heavy-duty anchor (I prefer Toggle bolts), if you’ll be hanging something that is very heavy or needs to support a lot of weight such as chandeliers.

How expensive it is

Self-drill anchors tend to be cheaper than toggle bolts and expansion anchors but offer less substantial results. Different drywall anchors are made for different surfaces. Some require that you bore into a wall or ceiling, while others can be attached by drilling directly into the anchor itself.

How to Choose the Best Drywall Anchor?

To choose the best drywall anchor, you’ll need to know what you’re using it for.

Knowing what kind of weight they will hold is important in making an informed decision on which type of drywall anchor to use. 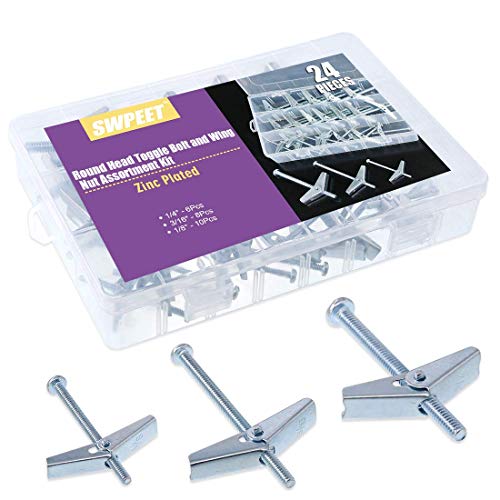 With Swpeet Toggle bolts drywall anchors you can’t miss. These are currently the best on the market, made of high-quality materials. They are perfect to hang up either a heavier object on your ceiling or a shelf on the wall.

These heavy-duty anchor toggle bolts are designed for ceiling fans and other heavier ceiling installations. They can support up to 100 pounds of weight with correct installation. You can use them to hang light fixtures, mirrors, shelves, and pictures. 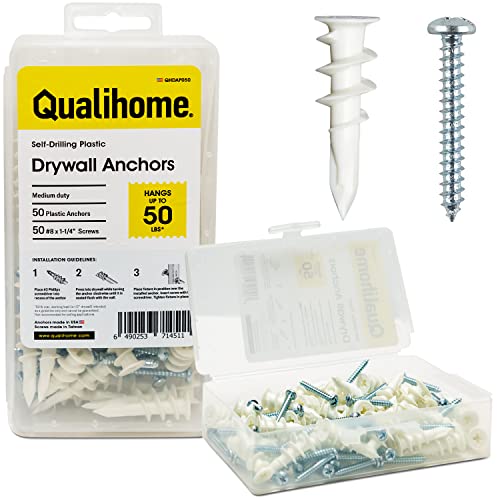 These self-drilling plastic anchors are primarily used for decorative purposes. They’re extremely easy to use and can be placed into walls, ceilings, and other surfaces without the need for any kind of pre-drilling.

They are good for hanging light fixtures with a maximum weight of 10 pounds on walls and ceilings. They come in packs of 50, so if you have a larger home or need them for multiple rooms they’re worth checking out! 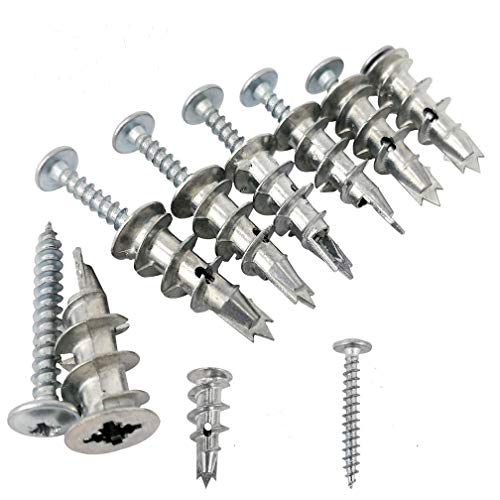 Self-drilling metal anchors can withstand up to 50 pounds of weight and are great for larger objects. These heavy-duty anchors come in packs of 30 and can be used in walls or ceilings.

These are great if you want to create a very secure anchor on your wall, ceiling, or other surface but need something that is still removable in case you need to access what’s behind it. In addition, installation is straightforward and much easier compared to for example toggle bolts. 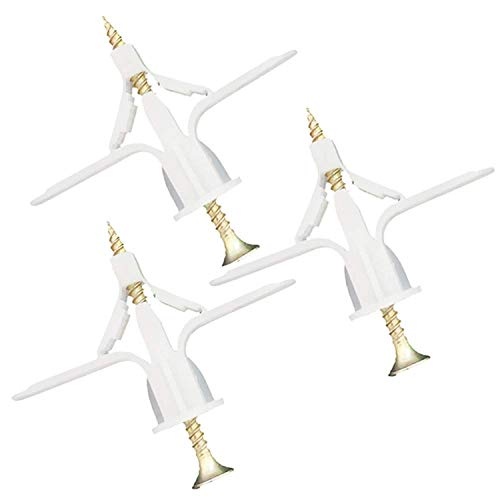 Expansion anchors are used for hanging objects or fixtures anywhere from 10 – 30 pounds, but they’re most commonly associated with the installation of shelves and cabinets.

They are easy to remove and are best for lightweight objects that you’ll be accessing on a frequent basis, or if you want to move them often. You can hand up to 30 pounds of weight on them.

Grear about the BICMTE set is, you get 50 pcs anchors with appropriate screws to fit perfectly.

Can you use Drywall Anchor on Wood studs?

Generally, you can use Drywall Anchors on any kind of wood no matter what the stud spacing. If the wood is soft enough for you to drill into, you can usually use a drywall anchor.

If it’s a strong, thick piece of wood, you may need to either drill a larger hole for your anchor or use a screw with a hook on the end.

TIP: I recommend using Self Drilling Metal Anchors. They are much stronger and get penetrate wood with ease.

What are Different between Drywall Anchor and Toggle Bolt?

A toggle bolt is similar to a drywall anchor, but it has two metal arms that swing around when you turn the screw in.

This movement holds the ceiling or wall up by wedging it between the back of the toggle and the wall. Then, you tighten down on it to securely hold it in place.

In addition, toggle bolts have a much higher maximum load capacity than drywall anchors. They are intended for safety and security purposes. 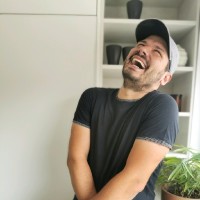