Home » What is the Difference Between Honed and Tumbled Travertine?

What is the Difference Between Honed and Tumbled Travertine?

Travertine tiles are desirable due to their trademark imperfections and dignified natural stone appearance. There are four classifications of travertine tiles in total. Of the four, two of them are most commonly used for residential flooring. They are: honed and tumbled travertine.

What is the difference between Honed and Tumbled Travertine?

What is Honed Travertine?

Honed travertine is the class of travertine most commonly used inside homes. The pock marks and holes in honed travertine tiles are filled in with an epoxy grout or resin and then the entire surface is smoothed out, or honed as its name implies.

This leaves behind a tile with a polished but generally flat finished appearance. Its edges are also typically squared which provides a more uniform shape.

What is Tumbled Travertine?

Tumbled travertine tiles go through a tumbling process that results in a rougher more rustic look than what you see with honed travertine. The tumbling process involves placing similarly sized and cut stones into a barrel that is then filled with water and abrasive grit or pebbles and sometimes even acid.

Travertine is vulnerable to acids because of its calcium carbonate make up. The filled barrel is then tumbled and the friction created softens the edges of the stones and creates a worn look. The tumbling process can take three to five weeks.

Are Honed and Thumbled Travertine Slippery?

Because honed travertine tiles have been smoothed and polished, they have less natural traction underfoot and can be slippery. Thumbled Travertine has slightly better traction because of its uneven surface.

There are measurement standards used in the industry to rate how slippery a tile is. You may have already seen references to these measurements before and simply not been aware of their meaning.

The SCOF, which stands for static co-efficient of friction, was the only standard rating until 2014. The SCOF rating of a tile is determined by multiple factors including: surface condition, footwear, and force.

The higher the SCOF number, the more friction and the less slippery a tile is.

So, let’s give the SCOF number context by comparing the measurements between the four different classifications of travertine tiles available on today’s market.

It should be noted that since 2014, there have been some changes in the industry regarding friction measurements and testing. When purchasing travertine tile you may find a reference to a COF or DCOF measurement instead of a SCOF rating.

While the testing methods and acronyms are different, the premise remains the same. The higher the number, the less slippery the tile is.

How Do You Fill Honed Travertine?

While it is true you can purchase honed travertine that is unfilled, it is much less common. Generally, as part of the honing process, the holes and pock marks are filled in to leave behind a smooth finish.

If you purchase unfilled honed travertine but decide to fill the holes after all, you’ll need a travertine filler such as Tenax Travertine Filler or grout. 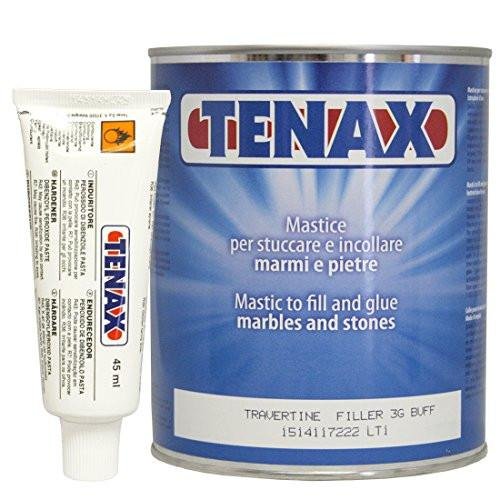 To decide between the two, consider that a sanded grout will have a rougher texture than the rest of the surface of the honed tile. If you want to match the smooth texture of your tiles, the filler is the better option.

How Do You Fill Tumbled Travertine?

Prior to grouting and filling, test it on a spare tile to see how the color of your chosen grout interacts with the colors of the tiles.

You may find that you like a contrast of colors to enhance the filled imperfections. Alternatively, choosing a grout color that matches the color of your tile will result in a quieter and simpler look.

Do Both Honed and Tumbled Travertine need to be Sealed?

Honed travertine tiles have been filled and smoothed but their surface remains porous. The same is true for tumbled travertine. Their porous nature makes them vulnerable to staining.
Therefore, they should be treated with a penetrating sealer first, and then a surface sealer. The sealant applications need to be done upon installation and then every three to five years after as routine maintenance. Applying proper sealants will create an absorption barrier that allows you time to clean up the spill before it seeps into the stone.

For more information about travertine and it’s pros and cons, read my post, “What is Travertine?